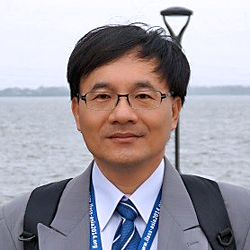 Professor Wei-Hsin Chen received his B.S. degree from the Department of Chemical Engineering, Tunghai University, Taichung City, Taiwan, in 1988, and a Ph.D. degree from the Institute of Aeronautics and Astronautics, National Cheng Kung University in 1993. After receiving his Ph.D. degree, Dr. Chen worked in an iron and steel corporation as a process engineer for one and a half years (1994-1995). He joined the Department of Environmental Engineering and Science, Fooyin University in 1995 and was promoted to a full professor in 2001. In 2005, he moved to the Department of Marine Engineering, National Taiwan Ocean University. Two years later (2007), he moved to the Department of Greenergy, National University of Tainan. Now he is a Faculty Member at the Department of Aeronautics and Astronautics, National Cheng Kung University. Professor Chen visited the Princeton University, USA, from 2004 to 2005, the University of New South Wales, Australia, in 2007, the University of Edinburg, UK, in 2009, and the University of British Columbia, Canada, from 2012 to 2013, as a visiting professor. His research topics include hydrogen production and purification, bioenergy, clean energy, carbon capture, and atmospheric science. He has published over 350 papers in international and domestic journals and conferences with a h-index of 33. He is the editorial member of a number of international journals, including Applied Energy, International Journal of Energy Research, Energies, etc. He is also the author of several books concerning energy science and air pollution. His important awards include the 2015 Outstanding Research Award (Ministry of Science and Technology, Taiwan), 2015 Highly Cited Paper Award (Applied Energy, Elsevier), 2016 Highly Cited Researcher (Thomson Reuters, Web of Science), etc.

All session by Wei-Hsin Chen